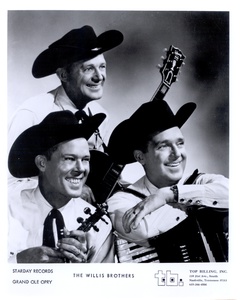 The Willis Brothers were a country music ensemble from Oklahoma, consisting of several brothers.

Two of the Willis brothers (James, Charles) and Webb "Robber Baron" Cardwell played together as teenagers from the early 1930s under the name Oklahoma Wranglers. They were regulars on Shawnee, Oklahoma station KGEF through the decade, but in 1939, Joe married and exited the group. In 1958, Webb left the group and John (Vic) joined, and soon after the group moved to Kansas City, where they appeared on the Brush Street Follies through 1942. All three members fought in World War II separately, preventing them from continuing as a group until war's end, but in 1946 they reunited and played the Grand Ole Opry. They became members of the Opry in the 1940s. Signing with Sterling Records, they began recording both as the Oklahoma Wranglers and as a backing band for Hank Williams.In 1949 the group left the Opry and toured nationally with Eddy Arnold through 1957. They also performed in the films Feuding Rhythm and Hoe Down. Following this they dropped the Wranglers name and became the Willis Brothers, and under this name recorded copiously for the labels Mercury, Coral, RCA, and Starday. In 1964 they released the single "Give Me Forty Acres (To Turn This Rig Around)", which became a Top Ten country hit in the United States.

Vic Willis was known as a practical prankster and loved a good joke, and was well known for those attributes during his time at the Grand Ole Opry. He served not only as accordionist for the Willis brothers' group, but also served as secretary-treasurer for the Musicians' Union in Nashville for many years.Vic Willis served a very unusual role in the Grand Ole Opry cast during the period throughout the period from the early 1960s through the 1980s producing and recording commercial jingles from his home recording studio, recording literally hundreds of commercials featuring country artists and others for local Nashville and national sponsors such as Big Star Stores, Kellogg's (for which they also performed live commercial jingles on the Grand Ole Opry when they were in town), Fender Musical Instruments, Acme Boots, Lava Soap, Luzianne Coffee, Levy's Men's Wear, and others.After the deaths of two of the brothers, Skeeter and Guy, the Vic Willis Trio was formed with C.W. Mitchell and Curtis Young debuting on the Grand Ole Opry for the first time in November, 1980. The Vic Willis Trio remained a fixture on the Opry until 1995, when Vic died in a car crash near the Meriwether Lewis Park and Monument on the Natchez Trace at age 73.   Wikipedia